What is CHF Canada?

Learn about our national board

The Co-operative Housing Federation of Canada (CHF Canada) is the nation-wide umbrella organization for co-op housing and Canada’s link with co-op housing around the world. The federation exists to unite, represent and service the co-op housing community across Canada.

Co-operative housing is a Canadian success story. For more than 40 years, housing co-ops have been providing Canadians with affordable community housing. Some 250,000 Canadians of all backgrounds, in every province and territory, make their home in a non profit housing co-op.

Canada’s 92,000 co-op homes are the product of a unique partnership between community housing groups and governments within Canada. Starting in the 1970s, governments have invested in co-op housing programs through financial support and legislation. That investment has provided a valuable asset that will serve Canada’s housing needs for generations.

In support of its mission, mandate and values, CHF Canada’s Board and Ontario Council establish a three-year strategic plan, from which is developed annual operating priorities that meet the present and future needs of its members.

An annual meeting is held each year in a different Canadian city. There, delegates from member co-ops from all across Canada meet to take workshops, debate policy, elect board members and the finance committee and socialize.

Offices and staff are located in Ottawa, Toronto, Winnipeg, Vancouver and Halifax.

Housing co-operatives and other members look to CHF Canada for a wide range of advice, education and support. CHF Canada is recognized for the way it actively defends the interests of its members by speaking up for co-ops and intervening with government on their behalf. The federation successfully lobbied for retrofit grants, reduction in prepayment penalties for co-ops paying off mortgages and refinancing and protection of subsidies for low income people living in co-ops.

CHF Canada offers a number of services such as insurance, asset management and refinancing to help member co-ops prepare for the future. As well, they provide help with special problems individual co-ops may be facing.
The successful self-management of each housing co-op depends on effective training. CHF Canada joins with regional federations of housing co-ops in making education services available to co-op volunteers and staff. At the annual meeting they offer a wide range of education workshops relevant to co-op life and operation.

For more information on CHF Canada see their website www.chfcanada.coop. 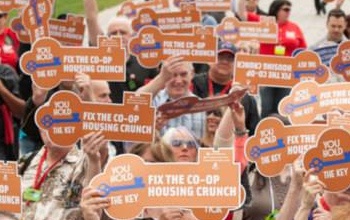